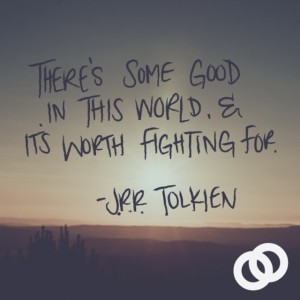 We all know of the vast number of tragedies that struck the world over the weekend beginning with Friday the 13th of November. Take one look at your Facebook feed, and it’s flooded with profile pictures in a colour-swatch of the French flag. Add several posts from those wanting to raise awareness to other less-reported tragedies, and contrast with posts that can be politely be described as complete racism towards our great multicultural society.

Well, that’s what my Facebook feed looked like, anyway. It still looks like this, actually. After attempting to watch a play-through of the new Fallout 4 game that same weekend, I had to stop about 20 minutes in as it was way too…realistic in comparison to what’s been happening and the hatred I was reading on my newsfeed. The thought that there are nuclear weapons that could wipe out the entire world instantly, in the hands of power-hungry nations where it could only take one person to decide their detonation…it was scary. I had to step away from watching a video game trailer of what was meant to be fiction due to how much it duplicated what out potential future could be like in comparison to the events over the weekend.

I spent the whole weekend trying to decide if I’d write anything on Facebook about any of the events from that weekend, including the natural disasters. Facebook kept prodding at me to change my profile picture to colours of patriotic support…but in changing my picture, would that help save the lives of those who lost theirs over the weekend? Would it stop terrorism? Would it help those already suffering from acts of terrorism?

Well, I ended up doing nothing.

I saw people with whom I attended high-school writing ridiculously thoughtless, uneducated, racial comments which honestly made me quite disappointed. But why should I be? It’s their place to express their opinion, and they have as much of a right to share their opinion, even if I disagree with it. If I don’t like what they’re writing, I could simply remove them from my Facebook, right?

At the same time, I have some very differing opinions on topics that could easily cause that same level of disappointment in friends and family through Facebook – related to religion and culture in particular. Yet, I feel it’s still something that’s not appropriate for me to discuss over Facebook. I’d prefer to either keep it to myself, share it with those I trust and love, or write about it in a space I openly call my own, such as this blog.

So, that weekend really influenced me yet again in my decision to share less on Facebook. Instead, I hope to focus on the good things through my blog here. I want to write about things that inspire, that help people to be creative and that assist with people looking for the little things in life that make them happy. I hope to follow J.R.R Tolkien’s perspective, and continue to promote the good in the world. I look forward to sharing the happiness I find in my life with you!

This site uses Akismet to reduce spam. Learn how your comment data is processed.